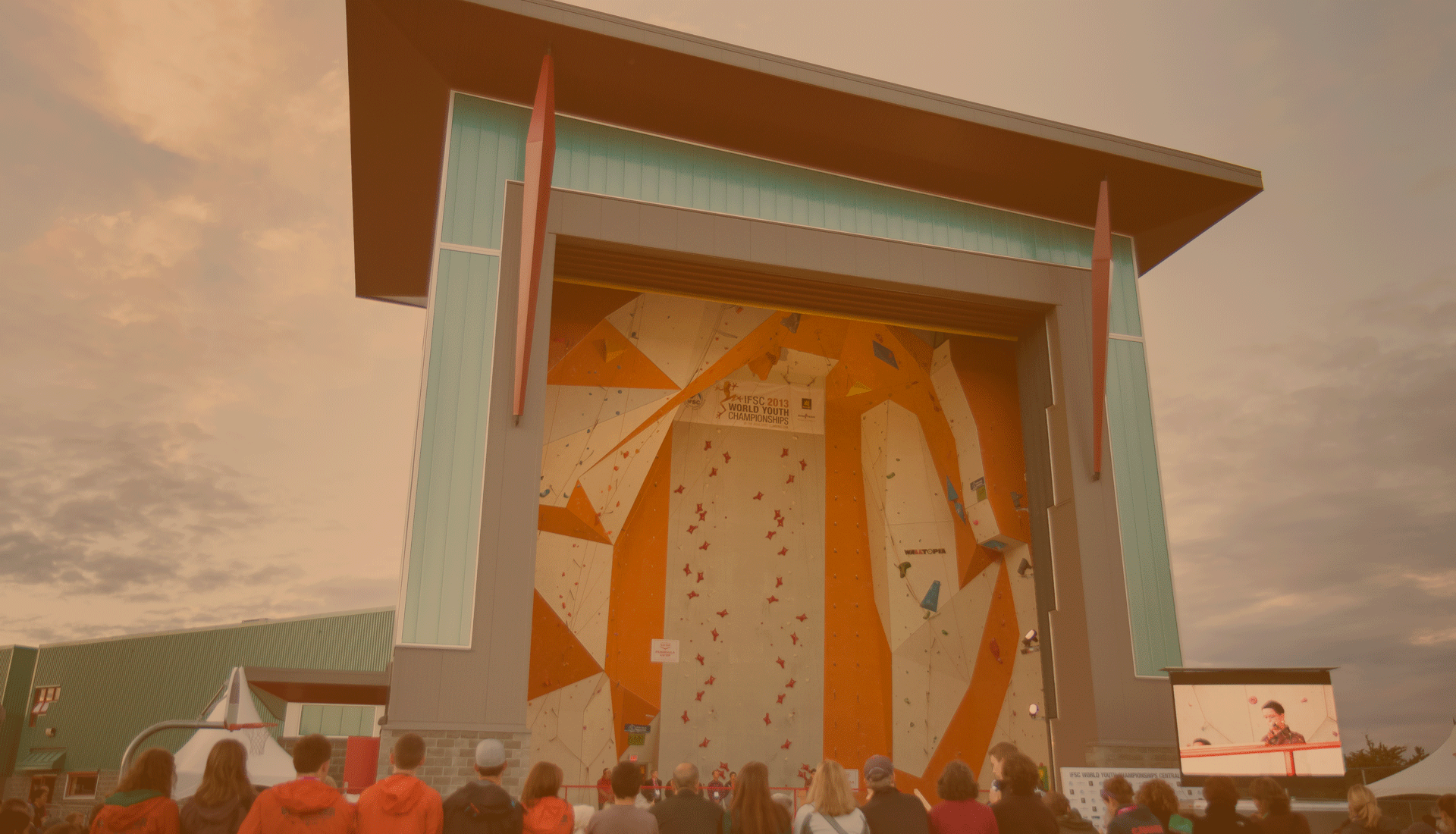 This is the original discipline in competition sport climbing dating back to the late 1980’s. Early competitions used routes chiselled into real rock.

Athletes have one attempt on each route per round and are ranked according the highest position reached on each route. When 2 routes are used, final qualifying rankings are determined by combining ranks from both routes.

The number of competitors advancing to semi-final and final rounds is based on a pre-set quota determined by the number of entrants in the category.

Flash – In this format, athletes get to watch a video preview of the route and also watch other competitors as they climb.

On-sight: In this format, athletes are not allowed to watch the competitors before them in the running order.  When they arrive at the competition, athletes are checked into Isolation Zone (read more about isolation below).

The term isolation or “iso” refers to the area used to isolate competitors and registered team officials from the competition zone during On-sight rounds. The purpose of isolation is to ensure that no competitor has information about his/her route beyond the 6 minute observation period (read more about Observation below). For this reason, isolation rules are strict: no communication devices, no communication with individuals outside isolation and once an individual leaves isolation he/she cannot return until iso is empty. Should a parent need to communicate with an athlete who is in isolation, this can be done through an isolation monitor or competition official.

On-deck chairs and other designated areas within the competition zone are considered part of isolation and the same rules apply.

This refers to the 6 minute period athletes have to preview the route they will climb. During this time athletes may use binoculars, notepad. Electronic recording devices are not allowed. Coaches and team officials DO NOT accompany athletes during Observation.

In this event, it is the fastest to the top!  Competitors each get 2 qualifying  runs to post their fastest time. The best of the two times determines their ranking and qualification for finals. Finals is a head to head race – the winner of which advances to the next round of the finals.  This continues until their are only 2 left…

The route judge may re-assign scores after reviewing official video of the round. This is common when multiple athletes have the same “height” score in a round. Video review allows for direct comparison of these performances

“Height” scores are translated into a rank for the route (this appears on the results sheet under “position”). 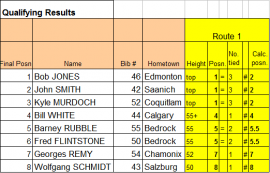 Here are route 2 results. Note that fictional character Kyle who had topped       #1 is in position 6. This will be important when we look at the combined           results for both routes.

This is the final rankings for qualifying showing how the results from route 1   and 2 are combined.

There are 2 types of results that will be published: 1) Provisional Results and 2) Official Results.

Appeals of results can only be made by coaches or officially sanctioned team officials registered with the governing body for the event.

It is important to check results soon after it is announced they have been posted. The rules limits the period of time in which appeals can be made. More details on appeals including fees and process can be found in official rules.