Central Saanich, BC – The Boulders Climbing Gym in Central Saanich is a beehive of activity this week as athletes from no less than six teams are already on the Island and training at the Gym in advance of next week’s International Federation of Sport Climbing (IFSC) 2013 World Youth Climbing Championships.

Climbers from Israel, Switzerland, Slovenia, Russia, Canada and the 47-member strong United States team all have training sessions scheduled over the next week and on Wednesday, the U.S. team was one of the first to acclimatize themselves to the Boulders 18-metre high competition climbing wall and the rest of the facility.

Team USA Head Coach Claudiu Vidulescu, originally from Romania, but who moved the U.S. in 2001 and has been coaching the U.S. team since 2004, was appreciative of the opportunity to bring his team to The Boulders for training.

“Having the chance to train on the main wall that will be used for the competition is a huge plus for our athletes and for our coaches,” said Vidulescu. “The kids will be able to get used to the various holds, especially the speed competition holds which we don’t have in the U.S., as well as other little things like the texture of the wall, the climate, which is a bit cooler than we are used to, the surroundings and the facility in general. Because of all that, as well as the fact that we have the largest team competing here at the Championships, we feel that we are in the best position to succeed than we have ever been going into a World Championship.”

USA Team Manager and Assistant Coach Chelsea Rude also expects many of her athletes to perform well. “Josh Levin, Ryan Strickland and Thomas Pitzel will be three of our speed climbers to keep an eye on for sure,” said Rude. “Josh just came back from the World Games in Colombia where he set a new unofficial American record of 7.49 seconds.”

“In the lead category for the girls, Margo Hayes and Claire Buhrfeind should do well,” added Rude, “while for the boys, we are expecting Drew Ruana to be one of our top competitors.”

Another athlete working out today was Slovenia’s Domen Skofic, who arrived in advance of his teammates, after coming here directly from last week’s World Games in Colombia. The 19-year old Skofic was a World Champion in the Youth A category in 2011 and took silver as a Junior at the World’s in 2012. He is coming off a 4th place finish at the recent 2013 World Cup stop in Briançon, France and an 8th place finish at the World Games.

“I am looking forward to competing here in Canada,” said Skofic, “and just want to enjoy the competition and the venue. Obviously I want to do the best I can, but I know I will have to be my best, as the competition will be very tough.”

That competition will include the likes of Nanaimo BC’s Elan Jonas-McRae and Calgary, Alberta’s Marc Eveleigh, both members of Team Canada, who will be at the Gym for their final training sessions on August 11th and 12th. Jonas-McRae, Eveleigh and Skofic are all ranked in the top ten in the world in the Junior age division.

The IFSC World Youth Climbing Championships take place August 15th to 19th at The Boulders Climbing Gym adjacent to Stelly’s High School in Central Saanich. Opening Ceremonies take place Thursday August 15th at 8:00 pm. Qualifying for the lead/difficulty climbing category takes place all day Friday and Saturday beginning at 9:30 am, while the speed competition runs all day Sunday. Semi-finals (9:30 am) and finals (4:30 pm) in difficulty take place Monday, with the awards and closing ceremonies at 7:30 pm. Admission Thursday through Sunday is free, while there is a $5 admission for the semi-finals and finals on Monday. 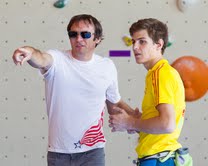 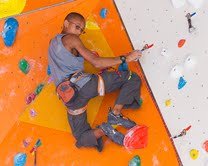 Team USA climber Kai Lightner sneaks a peek back at his coach for advice during a training session at The Boulders Climbing Gym on Wednesday (Photo: Christian J. Stewart / The Boulders Media) 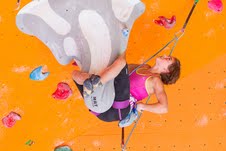 Team USA climber Margo Hayes contemplates her next move while hanging upside down on the stalactite, a mere 18-metres above the floor of The Boulders Climbing Gym, during her training session on Wednesday (Photo: Christian J. Stewart / The Boulders Media)

About the International Federation of Sport Climbing (IFSC)

The International Federation of Sport Climbing (IFSC) was created in 2007 and is a non-governmental international association with a non-profit-making purpose of international interest. The principal purposes of the IFSC are the direction, regulation, promotion, development and furtherance of international climbing competitions (Lead, Speed and Boulder). The IFSC fosters links, networks, and friendly relations among its members, their climbers and officials. The IFSC is recognised by the IOC and is member of ARISF, SportAccord and IWGA. For more details, please visit the IFSC web page at http://www.ifsc-climbing.org

About the Boulders Climbing Gym

The Boulders Climbing Gym is a not-for-profit society, with the mandate of making climbing accessible for everyone, regardless of ability or ability to pay. With over 13,000 square feet (1,208 square metres) of climbing space, The Boulders Climbing Gym is a community facility and a unique social enterprise, providing adaptive recreation and rehabilitation programs, youth recreational and competitive programs, as well as facilitating a climbing academy at Stelly’s Secondary School. All instructors are certified by the Association of Canadian Mountain Guides. See www.climbtheboulders.com for more details.

Sorry, the comment form is closed at this time.