Sheffield, England – Boulders Climbing Gym athletes Alison Stewart-Patterson (Victoria) and Elan Jonas McRae (Nanaimo) are returning from the 2013 British Lead and Speed Climbing National Championships with extra hardware in their luggage, having won a combined four medals at the event this past weekend in Sheffield, England

Stewart-Patterson and Jonas-McRae, who both train at the Boulders Climbing Gym in Central Saanich on Vancouver Island and who are members of Sport Climbing BC (SCBC), were competing at the British Championships at the new Awesome Walls facility in Sheffield.

In the youth lead competition, held on Saturday October 5th, both Jonas-McRae (18) and Stewart-Patterson (19) finished on the podium, placing 2nd and 3rd respectively in the Junior (age 18/19) category.

On Sunday October 6th, the open (senior) lead and speed championships were held.

Jonas-McRae went in to the finals in 1st place, with former World Youth Climbing Championship silver medalist (2011) Edward Hamer tied for second with current British bouldering champion Dave Barrans. Jonas-McRae was the only climber to reach the top of both qualifier routes, with both Hamer and Barrans falling one move before the finishing hold.

In the final, ‎both Jonas-McRae and Hamer made it through a complex and difficult roof crux near the top of the route, however Hamer would then advance two holds further up the wall than Jonas-McRae to capture the gold.

Barrans would fall before the roof, and Connor Byrne ‎fell on the roof crux, thus capturing the bronze.

The silver medal by Jonas-McRae marked the first time a climber from a trans-Atlantic country made it to the men’s lead podium at a British climbing championship. USA climber Alex Puccio placed second in the women’s British lead championship in 2012.

The speed competition also attracted international attention, leading to a women’s podium that, for the first time, contained no climbers from the United Kingdom.

Gold went to Lucia Korcova (28) of Slovakia, who posted a time of 11.28 seconds. Stewart-Patterson placed second, with a time of 12.8. In ‎third place was Lucia’s twin, Simona Korcova. Stewart-Patterson also competed in the women’s lead championship, missing finals with a tenth place finish.

Jonas-McRae also competed in the speed competition, his first ever, and surprised himself by placing sixth, with what was a personal best of 19.2 seconds

Both Stewart-Patterson and Jonas-McRae thoroughly enjoyed the competition, particularly the opportunity to compete in three competitions each in two days.

Said Jonas-McRae, “I’ve recently made significant changes to my climbing style, including climbing more efficiently, faster and committing to big moves. This trip allowed me to practice this on six long competition routes over a two-day period, excellent preparation for the upcoming World Cup competitions I will be going to. By my last climb – the open finals – I knew I fell‎ off because I was truly exhausted.”

Jonas-McRae will be heading to Europe in November to compete for Canada in two International Federation of Sport Climbing (IFSC) Lead World Cups, the first, in Valence, France (November 1-2) and the second, in Kranj, Slovenia (November 16-17). Jonas-McRae will join fellow Canadian and reigning Overall Men’s World Champion Sean McColl at both events.

As for Stewart-Patterson, the competition ‎was important to her continued development as a competitor. “At this stage in my career, I need a lot of competition experience – both in lead and speed.” noted Stewart-Patterson. “In lead, I need to work on my ability to re-set my mind when I run in to challenges on the wall during a competition. In speed, I have recently changed my sequence, and the more competition practice I get, the better. Although, after five long lead comp routes and seven runs on the speed route, I am looking forward to a few days off!”

Along with coach Kimanda Jarzebiak, Jonas-McRae and Stewart-Patterson praised the organization of the event and the new facility. “It was well run, with amazing route-setting in a great facility, built with competitions in mind”, said Jarzebiak.

Jonas-McRae headed back to Canada on October 7t‎h, to continue training, while Jarzebiak and Stewart-Patterson are heading to Lancashire to spend a few days volunteering for Climbers Against Canada (CAC)(http://www.climbersagainstcancer.org/), helping founder John Ellison by folding and packing t-shirts for shipping. 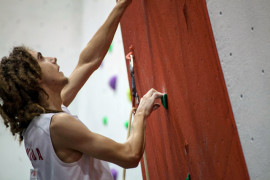 Boulder’s climber Elan Jonas-McRae begins his ascent up the wall during one of his qualifying climbs at the 2013 British Lead Climbing National Championships last weekend in Sheffield, England (Photo Courtesy British Mountaineering Council).

About The Boulders Climbing Gym

The Boulders Climbing Gym is a not-for-profit society, with the mandate of making climbing accessible for everyone, regardless of ability or ability to pay. With over 13,000 square feet (1,208 square metres) of climbing space, The Boulders Climbing Gym is a community facility and a unique social enterprise, providing adaptive recreation and rehabilitation programs, youth recreational and competitive programs, as well as facilitating a climbing academy at Stellys Secondary School. All instructors are certified by the Association of Canadian Mountain Guides. See www.climbtheboulders.com for more details.