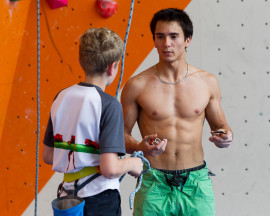 July 1, 2013, Central Saanich, BC (ISN) – World Champion climber Sean McColl was on hand Monday at The Boulders Climbing Gym in Central Saanich to work with a number of Boulders youth climbers in advance of the IFSC World Youth Climbing Championships coming up in August.

For those not familiar with the sport of climbing, imagine for a moment that you are a young hockey player and one day you show up for practice and there, leading you in your session and coaching you that day, is none other than Sidney Crosby, arguably the best hockey player in North America, if not the world.

Such was the case for the local sport climbing community Monday afternoon at the Boulders Climbing Gym in Central Saanich, when a number of young climbers and their parents gave up their Canada Day plans to come and train with 25-year old Sean McColl, the current Men’s World Climbing Champion and one the most successful competition climbers to come from North America.

Sorry, the comment form is closed at this time.