Yesterday was a long but fabulous day for Team Canada. Elan finished 11th overall in his first Worlds – definitely a rare accomplishment. Elise Sethna of Canmore also climbed in the semi-finals, finishing 24th.

As important were the strong showings from the entire Team Canada. We had a number of personal bests (like Robert Stewart-Patterson in lead and speed, and Maegan’s performance in the second qualifier). Those who were encountering Worlds for the first time (like Pia Graham, Iyma LaMarche, Rose Gallo, Parker Smith, Jarred and Danielle Plamondon, Arianne Forbes, Liisa Oullet and Ben Haley) were able to wrap their heads around the crowds and the size and energy of the event, and climb strong.

Last night’s lead finals were impressive, including a super final in Female A.

All athletes represented Canada well. We haven’t been kicked out of the hostel yet, either!

We’re spending this morning exploring Edinburgh, before heading back to the arena to watch speed finals and have a reception with parents. 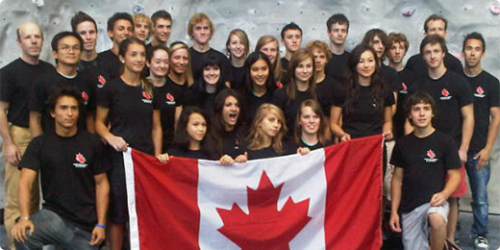